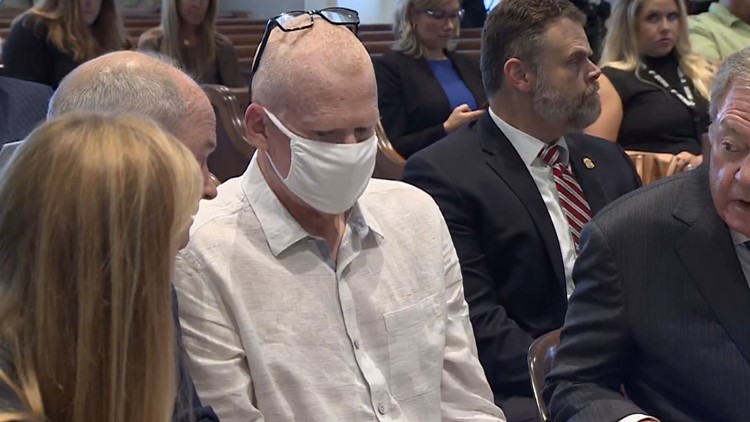 WALTERBORO, S.C. — Disgraced South Carolina attorney Alex Murdaugh has pleaded not guilty to charges of killing his wife and son. And both sides have agreed to keep evidence secret in an effort to ensure a fair trial.

Murdaugh was at the Colleton County Courthouse in Walterboro Wednesday morning where he appeared for the first time on murder charges in the the June 2021 deaths of his wife Maggie and youngest son Paul.

During the hearing, no new evidence or motive was presented, as both sides agreed that they did not want to discuss the particulars of the case in open court. However, the prosecutor said say that Murdaughs previous indictments on financial fraud charges “provides the background and motive for June 7.”

Bond was denied in the case but Murdaugh’s attorney, Dick Harpootlian, did not request one. Both sides agreed that they would try to keep all motions as secret as possible to avoid the media and the public from getting access to information regarding the trial. They also asked that a gag order for talking to the media be put in place.

While both sides were in agreement on most issues, they did spar slightly on the issue of whether a speedy trial could take place. Murdaughs defense wants the trial to happen this fall, but the prosecution would not commit to an accelerated timeline.

RELATED: Alex Murdaugh indicted for murder of wife, con: What happens next?

According to the indictments, Murdaugh acted “with malice aforethought” in the killings of his wife and son. Alex Murdaugh allegedly used a shotgun to kill his son and a rifle to kill his wife. Because of the manner of death, Murdaugh also faces two counts of possession of a weapon during the commission of a violent crime.

Months after the deaths of Maggie and Paul, in September 2021, Alex reported that he had been shot while his car was stopped on a rural Hampton County road. SLED investigators later said that Murdaugh had planned the incident, along with alleged gunman Curtis Smith, so that his surviving son Buster would get an estimated $10 million life insurance benefit. This incident lead to charges of fraud and conspiracy against both men.

The murder charges are only the latest indictments to be brought on Murdaugh. He faces numerous charges related to financial crimes where he allegedly stole millions of dollars from clients of his former law firm, including the estate of his former housekeeper Gloria Satterfield.

SLED has also reopened the investigations of Satterfield’s death at Murdaugh’s home, and the 2015 death of 19-year-old Stephen Smith. Smith’s death was initially classified as a hit-and-run after his body was found on a rural Hampton County road. SLED has not released any new details in these cases or how the Murdaugh cases led them to reexamine the deaths.

Before his death, 19-year-old Paul Murdaugh was to have appeared in court on charges relating to a February 2019 boating accident that lead to the death of 19-year-old Mallory Beach. Paul Murdaugh was allegedly driving the boat while drunk when it crashed into the Archers Creek Bridge in Beaufort County.

The South Carolina Supreme Court disbarred Alex Murdaugh on July 12, 2022. He remains in custody at Alvin S. Glenn Detention Center in Richland County after being unable to post a $7 million bond on the financial charges against him.