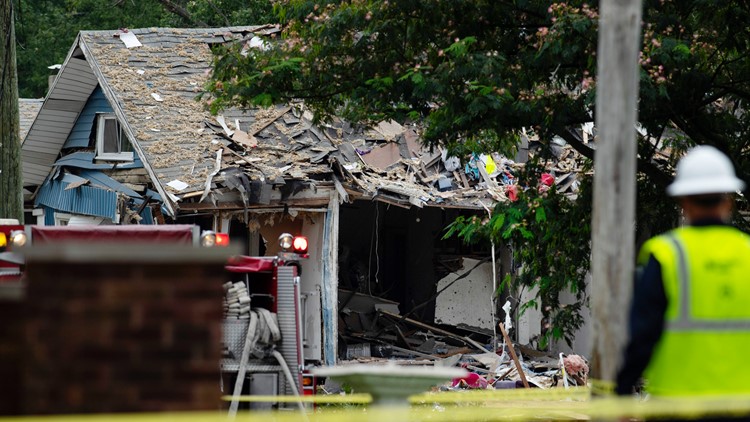 The explosion had a 100-foot blast radius and the cause has not yet been determined.

EVANSVILLE, Ind. — Emergency crews are responding to an explosion involving at least one house that reverberated across a neighborhood in Evansville, killing three people.

The Vanderburgh County Coroner’s Office told WFIE-TV three people died in the explosion that happened in the 1000 block of North Weinbach Avenue around 2 p.m. ET Wednesday.

Evansville Police Department spokeswoman Sgt. Anna Gray said at least one other injury was reported and that victim was taken to a local hospital for treatment.

The cause of the explosion has not been determined, but the Bureau of Alcohol, Tobacco, Firearms and Explosives was investigating. A phone message seeking comment was left at the Evansville field office of the ATF.

A security camera at nearby ABK Tracking captured the explosion on video and shared it with WFIE.

A total of 39 houses were damaged in the explosion, firefighters said, including four which were destroyed. Fire officials told WFIE-TV in Evansville most of the houses in the surrounding area were unoccupied, except for pets, at the time of the explosion.

In a news conference Thursday morning, Connelly said 11 homes are now uninhabitable, meaning they will have to be destroyed.

Aerial video posted on social media shows damage strewn in a residential neighborhood with numerous police and fire vehicles on the scene.

CenterPoint Energy, the local gas utility, was last called to the home in January 2018, Connelly said. CenterPoint issued a statement saying it “worked with first responders to secure the area.”

“CenterPoint Energy is working closely with the Evansville Fire Department, State Fire Marshal and other agencies as the investigation of this incident continues,” the utility said.

Jacki Baumgart, an office manager at Award World Trophies about 2 1/2 blocks from the site of the explosion, said she and other employees in their building panicked when they heard the blast.

“It was loud,” Baumgart said. “There was huge smoke.”

“We thought a tree fell on the building or a car ran into the place,” she said. “Debris from the ceiling came down.”

She continued: “Everybody here immediately ran out of the building. We thought the building was going to come down.”

Wednesday’s explosion also brought to mind a massive blast in 2012 that destroyed or damaged more than 80 homes in the Richmond Hill neighborhood on Indianapolis’ south side and killed two people. A man was convicted of tampering with a natural gas line at his then-girlfriend’s home in an attempt to commit insurance fraud, with the explosion killing two next-door neighbors. That man, his half-brother and girlfriend all received long prison sentences.