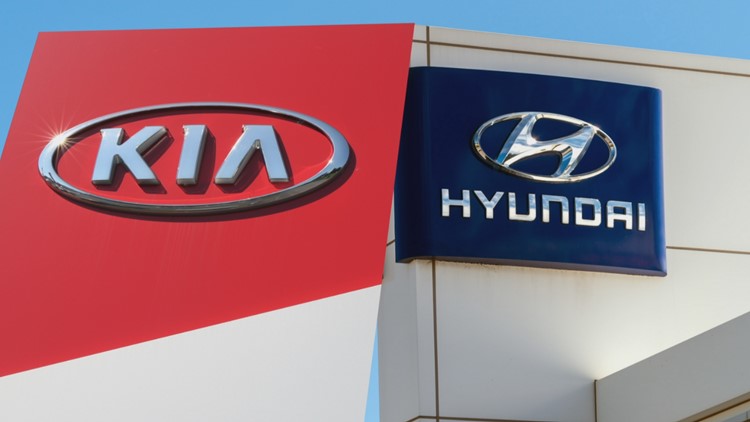 Automakers have known about the defect and the trend of thefts for at least a year.

ST. LOUIS — Donald Nelson walked out of his Shrewsbury home at about 5 a.m. one morning in June, only to find himself the latest victim of a nationwide trend. Car thieves are exploiting a weakness in the ignition systems of certain popular brands of cars.

It allows criminals to steal thousands of Kias and Hyundais – just like Nelson’s – using nothing more than a USB cord.

“When I came out, I thought I was in the Twilight Zone,” Nelson recalled. “I thought, ‘Maybe I parked my car in a different spot?’”

A quick look at his home surveillance footage answered his question.

His cameras picked up the last few seconds of his 2020 Hyundai Elantra speeding away without Nelson behind the wheel.

“Immediately I was thinking, ‘What am I going to do? How am I going to get to work? Where do I go next? What will happen with my insurance?’” he said.

He learned he’s not alone.

In St. Louis, thefts of those types of cars are up by nearly 400% compared to this time last year, according to St. Louis Police Capt. Janice Bockstruck.

Take Hyundais and Kias out of the city’s equation, and Bockstruck said total car thefts in the city would be down instead of up by 6%.

“That in itself speaks volumes that other makes and models of vehicles are down in our city but Kias and Hyundais are up,” she said.

In some areas, including Milwaukee, Wis., the car thieves named a gang after their favorite brand, calling themselves The Kia Boyz. Members have posted countless videos on social media showing themselves stealing cars and speeding through residential areas.

The City Council in Milwaukee contemplated filing a lawsuit against the automakers saying their vulnerable ignition systems are to blame for the city’s climbing crime rate. A class action lawsuit on behalf of Hyundai and Kia owners has been filed in federal court there, too.

In St. Louis, Bockstruck said many of the thieves are young. She doesn’t believe they are going by the Kia Boyz name or organizing meetups through social media to show off their stolen goods together.

Still, the younger a car thief, the riskier it gets, she said.

“They have less experience driving a vehicle and possibly more courage, so they drive erratically and recklessly throughout the city,” Bockstruck said. “No matter where you live, no matter what community you live in, if you have a Hyundai or a Kia, it’s vulnerable.”

Hyundai and Kia have known about the issue since last year, but Nelson said Hyundai never notified him about the trend.

“It would be nice if they would come out and replace the whole ignition system,” Nelson said.

Police say there is an easier fix, and the problem has forced the companies to change the ignition systems on newer models.

The problem, Bockstruck said, is many of the cars don’t have immobilizing technology, which requires the engine to read a computer chip inside a key to start.

Given the explosion of thefts, Kia and Hyundai have vowed to make the technology standard on all new models.

Kia and Hyundai would not answer any of the I-Team’s questions, and sent statements.

Kia wrote: “Kia America is aware of the rise in vehicle thefts of certain trim level vehicles in the St. Louis area. As of the current 2022 Model Year, all Kia vehicles have an engine immobilizer fitted as standard. All Kia vehicles for sale in the U.S. meet or exceed Federal Motor Vehicle Safety Standards.”

Hyundai wrote: “Hyundai Motor America is concerned with the rise in local auto thefts. The safety and well-being of our customers and the community is and will remain our top priority. These vehicles meet or exceed Federal Motor Vehicle Safety Standards and engine immobilizers are standard equipment on all new Hyundai vehicles.”

“That will help with future car thefts, but that’s not helping with cars that are currently in consumer use,” Bockstruck said.

Not even the police chief is immune to the crime.

Police arrested a 15-year-old boy after chasing him and using a Taser to subdue him. An officer injured his leg running after him, according to a police source.

Bockstruck said car owners like her former chief and Nelson should invest in an anti-theft device called The Club – which can lock a steering wheel – or park their cars indoors.

“A visual of (The Club) alone will have the person move on to the next vehicle and not attempt to steal your vehicle,” she said. “We have not seen any of them with a car Club attached to it that have been stolen.”

Bockstruck said St. Louis police are also trying to work with Kia and Hyundai dealerships to inform consumers about the issue and distribute Clubs, but “that hasn’t come to fruition at this time.”

Local auto parts store clerks have told 5 On Your Side they are running low on Clubs, as Hyundai and Kia owners scramble to find them.

Shrewsbury police told Nelson his stolen car was found about one month after it went missing.

It ended up at Terry’s Towing in Maplewood, where even the tow lot owner’s daughter, Grace Romines, has been a victim.

Her 2015 Kia Optima was stolen from her apartment parking lot two months ago. She used a tracking app and found it dumped in Rock Hill. She had it towed to her father’s lot. That same day, another stolen Kia came into her father’s lot with the Terry’s Towing cup she kept in her car.

The day Nelson came to the lot looking for his car, Romines said there were at least 20 other stolen Kias and Hyundais there.

“All are the exact same,” she said. “The ignition is busted. The car is gone through, rampaged all the same. Every single one of them.”

One of them, a 2019 Kia Sorento, still had a USB cord still hanging from the ignition.

It belonged to Tommy Schuette of University City.

“I called the police and found out quickly after calling that this has been a problem all throughout the area,” he said. “The police officer even showed me a video on how criminals are learning how to do this.”

The thieves had taken his son’s car seat, but police found the car within hours of it being stolen. There were marijuana buds on his dash, exterior damage and a tire was flat, but Schuette said he is hopeful his insurance company will fix it. He estimates he will be without a car for months in the meantime.

Nelson found his work ID, parking pass, umbrella and a letter his girlfriend wrote him still inside his stolen car – even after it was missing for a month.

He also found some things that didn’t belong to him, including marijuana buds, condom wrappers, candy and fast food trash.

“You just never really think it’s going to happen to you,” he said. “I mean, especially in my neighborhood. There’s a police station right down the street, a police officer lives across the street.”

He said he feels for other victims who don’t have a second car to use like he did while his car was missing or good insurance.

Nelson said his insurance company totaled his car and gave him a check.

He’s going to use the money to buy a new car, and it won’t be a Hyundai or a Kia.

Where to buy a steering wheel lock

Clubs are available for $15 at the Five Star Senior Center at 2832 Arsenal St, the St. Louis’ Citizens Service Bureau or at the Department of Revenue. Residents should call ahead to City Hall to check availability, bring proof of city residency, and pay in cash.

Non-St. Louis residents can find the devices online or at most auto parts stores.

Have concerns about your vehicle?

Hyundai customers can call the Hyundai Consumer Assistance Center at 800-633-5151.