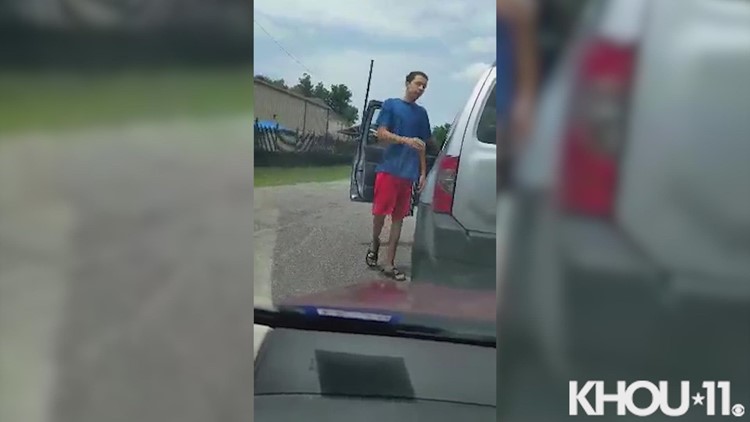 HOUSTON — Houston police are still investigating an apparent case of road rage that happened near Tidwell and the Hardy Toll Road on Sunday.

A driver, who asked us not to use her name or show her face, says she was stopped at the intersection of Irvington and Tidwell near Sam Houston High School when she was rear-ended by a fast-moving vehicle.

She says the man in the SUV that hit her made a motion, which she took to mean they would pull over and exchange insurance information.

She claims she pulled over and watched as the other driver turned around and drove in the opposite direction.

The driver said she then followed the vehicle to get his license plate. The SUV eventually pulled over on a street near Veteran’s Memorial Park.

The woman says no words or gestures were exchanged before the driver got out of the SUV and kicked in her headlight.

As he returned to his vehicle, she pulled out her cell phone, and said he then came back.

The video she recorded on her phone shows what happened after that.

A Houston woman says she thought the driver who had just rear ended her pulled over to exchange insurance information. The story is tonight on #KHOU11 at 10. pic.twitter.com/vfrnv8J5aF

The man is seen exiting from the driver-side door of his SUV, opening the back door and retrieving what appears to be a dumbbell, which he then hurled at her windshield.

The woman’s windshield was smashed as it broke through the glass. She can be heard screaming in the video while the man returns to his SUV and drives off.

The woman says she’s concerned that almost a week has passed and the suspect, whose face can clearly be seen in the video, still hasn’t been caught.

Police say they are still investigating.

The driver says she is traumatized by the experience and in pain from the crash. She says more than $3,000 in damage was done to her car.

Now, she’s hoping someone will come forward with information that leads to the suspect’s arrest.